We occasionally get a phone call that starts with the caller describing an unusual situation. They want to make us aware of a specific problem area. Because it’s important for us to have a clear understanding of what you are describing, it’s very helpful if you can send us a photo.  Just email it to us at alloygutterco@aol.com.

The office staff at Alloy Gutter Company is constantly monitoring our email account so that we can update information that is needed for jobs and quotes. Our experienced staff will take a look at the photo and get back to you promptly. In most cases, the unusual situation turns out to be something we have dealt with many times.

After over thirty five years in business, Alloy Gutter Company has the experience to troubleshoot any special needs. Give us a call, send us your pictures and we will make your gutter troubles a thing of the past!

Alloy Gutter Company provides material drops for both contractors and homeowners wanting to install their own gutters.  We will need some information from you so that we can provide you with an estimated price BEFORE we get to your job site. Also, this will assure that we have all the items that you need loaded on our truck. The following is a list of information we will need: Don’t be too concerned if your measurements are not exact. We will measure everything up once we arrive on site. We will make any adjustments that are necessary before running off any materials. Your quoted price will be adjusted according to the final amount of material that is run off. Of course, Alloy Gutter Company installs gutters. However, if you’re a contractor who wants to install your own gutters or a DIY homeowner, give Alloy a call. Depending on the color and location, most material drops can be done on the same day or the next day!
Author Alloy Gutter Categories Gutters Posted on Jul 10, 2015Jan 22, 2020

Are you purchasing a new home? If so, you are most likely going to have the property inspected before signing the final paperwork. One of the most crucial things every house needs is a properly functioning gutter system. The following is a list of things that the gutter portion of your home inspection should include: The gutters will be unable to do their job if anything on this list needs to be corrected. You don’t want to put off any necessary repair work; improper water drainage can damage the structural integrity of your new house. This could result in thousands of dollars of damage. Let Alloy Gutter Company repair or replace the gutters BEFORE you move into your new home. With over thirty five years of experience, we are the company to call. Congratulations on your new place!
Author Alloy Gutter Categories Gutters Posted on Jun 8, 2015Jan 22, 2020

Your gutters serve one purpose and that purpose is to direct water away from your foundation.  They are a vital feature in defending the structural integrity of your house.  So how do you know if your gutters are pitched correctly?  We recommend that you look inside the gutter to see if there is any standing water.  Standing water is a tall tell tale that your gutters need to be re-pitched. Gutters should be pitched toward a downspout for the water to flow properly.  You will want at least a quarter inch of a slope for every 10 feet. Long runs of gutters are intentionally high in the middle so water flows toward downspouts at each end.  If a gutter has too much slope, it will flood the downspouts, and there's a very good possibility that the gutter will overflow at the low end leading to the foundation to erode by the downspouts. If you are experiencing standing water or are noticing that your gutters are constantly overflowing causing your foundation to wash away, give the guys at Alloy Gutter a call right away.  We will be more than happy to come out and take care of the problem for you.
Author Alloy Gutter Categories Gutters Posted on Apr 13, 2015Jan 22, 2020

Occasionally, I get a phone call asking if all houses need gutters.  If a house has never had gutters are they really necessary?  How come the builder didn’t include gutters when the house was built? These inquiries are usually from someone contemplating the purchase of a home that has no gutters. The answer to their question is, “Alloy Gutter Company recommends that all homes have a properly functioning gutter system.” Gutters are a necessity for several reasons: How come the house never had gutters? Most likely it was simply a way to cut costs. However, why risk a wet/musty basement, a waterfall on your porch and damaged landscaping? Give Alloy Gutter Company a call and we will provide you with a quote for new gutters. Often, for less money than you think.  As a bonus, once we install your new gutter system, all of your showers will now be taken inside the house!
Author Alloy Gutter Categories Gutters Posted on Mar 11, 2015Jan 22, 2020

I’m always amazed by all the artsy/creative people out in the blogosphere. They never seem to run out of great ideas. They take the most unlikely objects and turn them into useful things for the home. Recently I went on Pinterest and searched “gutters;” I found gutter projects that are both doable and usable.

Many versions of outdoor planters are shown. Most of these gutter planters are attached to fences or hanging from chains. Herbs seem to be the most widely used plants. Typically, gutters hold rainwater but these now have drainage holes for the plants.

Another idea is to use gutters indoors as bookshelves. The photos often show them in children’s rooms. They can be cut to any length to create custom shelving units.

Can you think of any new uses for gutters? Here at Alloy Gutter Company we are sticking with what we do best; protecting your home’s exterior from moisture damage. However, you if come up with a crafty gutter idea, let us know and Alloy would be happy to share it on this blog!

If you own an older home, you may notice small circular concrete things sticking up a few inches above ground level. They are close to the home’s foundation.  What are these mystery things?  What was their purpose? Why don’t we see them on newer houses?

These mystery things are called crocks. They did serve a purpose many years ago. Rainwater from homes used to drain into the community sewer system. The water from your roof would end up at the water treatment plant. As cities grew, the cost became prohibitive. For this reason, many communities have outlawed draining roof water in the storm sewers.

Today, downspouts discharge rain water away from the house and directly onto the lawn.  At Alloy Gutter Company we occasionally get requests to seal up obsolete crocks. Alloy will cement over the opening where the downspout used to discharge; this is done at a very nominal charge. As a bonus, sealing up the crocks will bring your gutter system up to city code. Give us a call because Alloy Gutter Company can take care of ALL your gutter needs, including the crocks.

Have you toured any model homes lately? If you look closely you may notice a couple of new exterior items as you approach the house. Some builders now include a rain chain near the front door because it’s more aesthetically appealing than a downspout. In addition, you may spot a rain barrel on the property. Many home owners are concerned about water conservation and they realize that it’s beneficial to water plants with rainwater instead of tap water.

Alloy Gutter Company often gets calls asking if we install both rain chains and rain barrels...YES we do! There are many different styles of rain chains and rain barrels available. For this reason, we ask that you provide the materials. As long as you have these items on site we will be happy to hook them up for you as part of your gutter installation. You can also have us add them to your existing gutter system.

Alloy Gutter Company can take care of any of your gutter needs including minor repairs, complete gutter installations and adding the extras like rain chains and rain barrels...make us your first call to install it all!

Every spring we see advertisements that encourage us to freshen up the exteriors of our homes.  It’s so easy to get excited about adding beautiful flowering plants and fresh mulch to our landscapes. Everyone wants their home to have great curb appeal.  However, few people realize how important gutters are to maintaining the curb appeal of their homes.

Spring showers are great for greening up your landscape but if your gutters are leaking, those beautiful foundation plantings are taking a beating.  Make sure you look up during those rain showers to be sure your gutters are not overflowing and are draining the rain water away from your home’s foundation.   Stop any water erosion by having your gutters cleaned, repaired or replaced.

Gardening is hard work and we want our efforts to pay off for many years to come. Don’t let the rain wash away all your hard labor.  I have learned this lesson the hard way; one of my spring projects is to add soil and grass seed to an area where the soil eroded due to an overflowing gutter. Don’t let this happen to you. 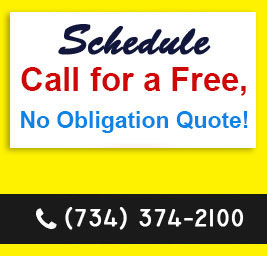